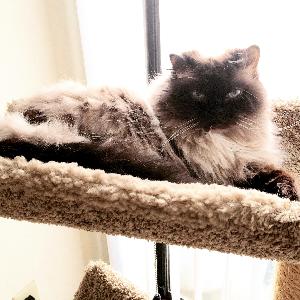 As most of you know, so much of Eric and I’s lives revolves around animals. We love them all, from lions to monkeys to koala bears to turtles, animals bring joy. The Animal Humane Society holds a special place in our hearts because they have given us the opportunity to adopt 3 beloved cats as well as the chance to foster many animals over the years, which is always fun and rewarding.

Eight years ago I first started volunteering at the AHS because I wanted to do something fun and add to my resume for college. I had no idea the impact it would have on my life. At first I volunteered in-shelter twice a month, fostered kittens, and volunteered at every event that I could. Eventually I found my fit with fostering and volunteering at a few events each year. I thought of my first kitten foster group in 2012 as an early birthday present when I picked them up in June. Six kittens (yes 6!) and they were THE cutest ever. We ended up keeping one, a “foster fail” we named Bobby. Of course I wanted to keep every one I fostered, but came to my senses and realized that I wouldn’t be able to keep fostering if I did that. We have taken in so many cats and kittens over the years that I’ve lost track, but they have all won a place in our hearts. And yes, Eric is a big fan of kittens as well! (He was not as big of a fan of the rats, guinea pigs or bunnies, haha)

Several years ago, I stopped into the shelter and saw this beautiful Himalayan cat. I sent Eric a picture thinking he would enjoy it, but didn’t realize he’d be at the shelter 10 minutes later wanting to adopt her. I was hesitant because she was quite old (almost 15 years), but he had wanted a fluffy Himalayan his whole life. We got a good 2 1/2 years out of Violet and she brought us so much joy. A few days after she passed, we were mourning and I saw a “Himalayan” online at the shelter. It said he couldn’t go to a home with other cats so I thought it would be a good opportunity for us to go pet him and help us grieve without risk of adopting another so soon. Little did we know that when we got to the shelter we’d see he was brought in with another cat and apparently *could* handle being around other cats. He was so lovable, we brought him home that day! We think it’s likely he is actually a Birman based on his face and markings, but either way, we love our snuggle-bunny Rocky.

Over the past 12 years I’ve seen first hand what the Animal Humane Society is capable of when it comes to helping the animals in our community. They even regularly bring in animals from other communities that don’t have the same resources. They are setting an example for shelters around the country and I couldn’t be more proud to support them. I hope you’ll join us!

Need answers to questions you have about Walk for Animals?
Please see our FAQ page or contact us by email and we'll do our best to help you.

If you think this page contains objectionable content, please inform the system administrator.